Classes and Instances in Python

This article will help a Python programmer become an expert and handle Python's object-oriented programming pieces, like classes and instances.

What are classes in Python?

Class is the most basic entity of Python because it acts as the core of object-oriented programming. Because of this, users can create and use classes and instances that are downright simple and easy.

Everything that a user sees in Python is an object, such as integers, functions, dictionaries, lists, and many other entities. It is a subpart of a class. Every Python object has a type, and users can create the object types using classes.

Let us take an example to understand the Python classes:

The class name is "Employees," and it does not inherit from another Python class. Usually, users capitalize the Class names, but they can only do this for a conventional technique, which is not always necessary.

Then, they have to create an indentation of everything within a class, similar to how they create indentation within a function, for loop, if statement, or any other block of code.

In the above example, we have created a Python class with the name of the class "Employees." Inside the class, the "pass" is the no-operation statement.

This Student class does not specify any attributes or methods, but syntactically, users need to define something in the class definition, and thus the pass statement.

Users can access any member from outside the class environment.

Let us see another example of a Python class:

What are instances in Python, and how to define and call an instance method?

Instances are objects of a class in Python. In other words, users can define an instance of a particular class as an individual object.

Users can define the Instance methods inside a Python class, similar to how they define a regular function.

Let us see an example to understand it more clearly:

Then, we created two objects with two different details of employees, and then we called the instance method according to the employee name.

Class and Instance Attributes in Python:

In Python, users can use attributes of a Class that belongs to the class itself. All the instances of that class can share this.

Class and Instance variables in Python: 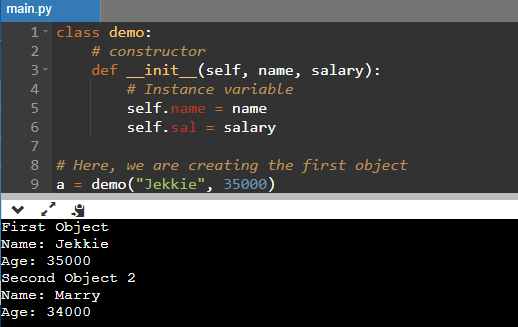 This article is all about classes and instances in Python. These are the basic components of a Python program. Thus, users can carefully handle the class and instance attributes and variables as they affect the entire class.

If users use these carelessly, undesired outputs showing errors may occur.