HomeWhat is Javascript? Difference between ReactJS and AngularJSAngularJS Interview Questions and Answers

Sorting means placing elements of a list in a specific or particular order. The order can be numerical, alphabetic, or alphanumeric. Like other programming language, using JavaScript also we can perform sorting operation. Among all these, the merge sort is one of the robust way o sorting large data structure elements.

What is Merge sort?

Merge Sort is a sorting technique that uses a divide-and-conquer approach to sort the provided list of elements. The algorithm splits the array into subarrays to sort the items.

It has a space complexity of O(n).

Here is an algorithm for Merge Sort:

Let's take the array below as an example:

we'll divide the above array into two parts and keep dividing the list into equal parts until it remains with single elements.

As the number of elements is 8, so they will get divided into two parts of size 4

We'll keep dividing the array until we get the single values.

Now we'll similarly combine them by comparing them with one another and putting them in sorted order.

In the same manner, we'll compare the array with 2 data values and put them in the sorted order as shown below:

In the final merging of arrays, after sorting the entire array. The array will look like this:

Here is the code for implementing Merge Sort in JavaScript. 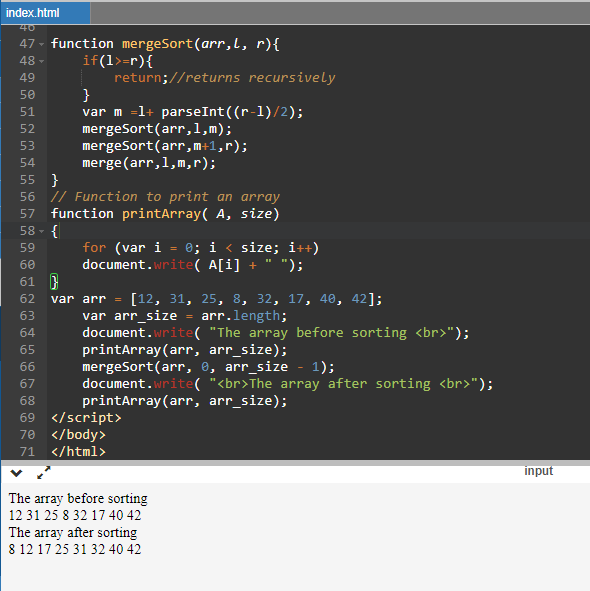 So here we are at the end of the article. We learned what merge Sort is and its algorithm, its time complexities, how it works, and a detailed explanation with an example. It is not the most efficient way of sorting but is surely one of the most widely used one.