Circular importing is a conceptual error that is formed due to circular dependency created with the import statement in our Python program.

Here, we have defined three programs. 2 of them are treated as modules. In the first code function1()  has been called that has a module2.function2() within itself as the calling function. The function2() of module 2 again has a print() and function3 and the body of function3() has some print().

Finally, the __init__.py is calling module1.function1(). This circular calls of importing statements and their associated function will create an error.

When Python performs the importing of a module, it verifies and goes through the module registry to identify if the module was already imported. In case the module has already been there registered, Python uses its existing object from cache.

The module registry is nothing but a data structure or tabular structure containing information about multiple imports (predefined and user defined) of modules that were initialized and indexed with module name(s). Developers can access this table using sys.modules.

There are many ways by which Circular imports can be avoided. Some of them are:

Changing the name of the Working file different from the module which is imported in the script can avoid the Circular Imports problem.

There are many cases where one module function depends on another model which in turn depends on it. This case mostly creates Circular Imports.

Here, merge both module1 and module2, so that the user-defined functions within them come under one module.

The python module can be imported anywhere in the program. It is not necessary for python to first import the module and start working over it. Importing the module before one line where it is needed to avoid Circular Import.

Here, In function one imports the newmodule before calling the fun3. 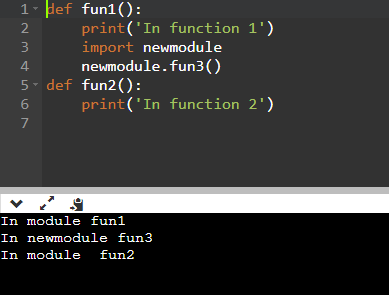